Following on from their visit to Vancouver last year, Centurion Explorers hosted members of the 40th Marpole Scouts at Kibblestone last week.

The Canadian Scouts arrived on Friday 31st July and despite some jet lag they managed to have a packed programme which saw them staying in London for a couple of days and visiting Manchester and Old Trafford. 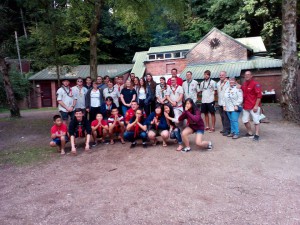 On their last evening, Thusrday 6th August, a BBQ was held as a farewell and members of the District, local Groups and members of Knightrider Explorers (who joined Centurion in Canada) were invited to join in. As a number of members of Centurion are members of 1st Porthill’s Drum Corps, the drums put on a short set to show off their talents.

After the drums had played some of the Explorers and Leaders sang a few songs and then it was on to the traditional campfire. 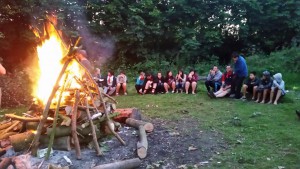 The Canadian Scouts went home the following morning, but it is hoped that Centurion will be able to meet up with them again within the next couple of years.

More photos are available in the Gallery and 1st Porthill’s Gallery.

Permanent link to this article: https://newcastledistrictscouts.org.uk/2015/08/bbq-for-canadian-scouts/