After saving his dad’s life, Jack has been hailed a hero!
He was at home with his dad, Adrian, who was cooking his tea. Suddenly, Adrian started having a chronic asthma attack. Jack was just 7 years old at the time. He stayed calm and collected, but acted quickly.
He immediately dialled 999, giving their home address and clear details about his dad’s condition. Jack then spotted the ambulance going the wrong way, so he helped direct it to his house in Knutton. Adrian was rushed to the Royal Stoke University Hospital’s resus room, and he’s now continuing his recovery at home. 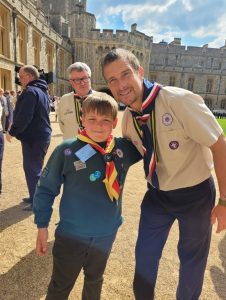 As part of Scout’s St. George’s Day celebrations, Jack visited Windsor Castle on Sunday 24th April to celebrate receiving a Meritorious Conduct and Gallantry Award for his bravery.
Jack’s dad, Adrian, says ‘Jack had a fabulous weekend – we also went to Thorpe Park! He’s very proud he received his award, and he was so excited to meet Bear Grylls.’
Jack says ‘My best moment was meeting Bear Grylls, and I was so proud to represent my group, 74th Silverdale Scouts.’

Permanent link to this article: https://newcastledistrictscouts.org.uk/2022/05/a-silverdale-cub-meets-bear-grylls/