Castle Capers is back, and this year Newcastle’s very own Scout Gang Show is celebrating a very special anniversary. It’s forty years since the variety performance, which brings together young people and leaders from across the district, was awarded “red necker status”.

Newcastle District Commissioner Vera Bloor says “not every Scout show, can call itself a Gang Show. A production needs to be regularly assessed by the Scout Association, to ensure that it meets the required standard, and only then does the cast earn the right to wear the prestigious red neckerchief during the performance. The fact that Castle Capers has been able to call itself a Gang Show for forty years is testament to the hard work and dedication of everyone involved in the show over the last four decades” 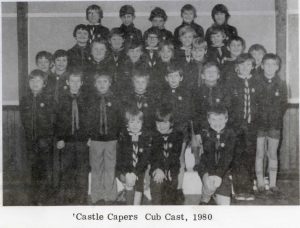 Castle Capers was first assessed in 1980 by Ralph Reader, who staged the UK’s very first Gang Show in 1932. To mark the occasion the team behind this year’s show is trying to track down members of the original cast.

Producer Heather Locker says “I’m so excited about this year’s show, rehearsals are going really well, and it would be amazing if we could get members of the original gang back together, to share their memories with us along with any photos they might have. We’re hoping they’ll come along to one of the performances too, as we’ve got some really talented young people in the cast, I can’t wait for everyone to see what they can do”. 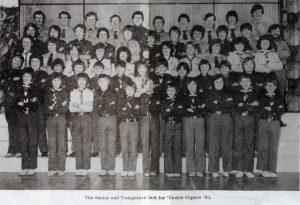 This year’s performance takes places at the Mitchell Arts Centre in Hanley from 15th-18th April. Amongst those returning to the cast this year is Cub Scout Leader Barbara Davies affectionately known as “Aunty Barb”. She’s been part of the show since the very beginning and remembers being awarded the red necker for the first time.

Barbara says “the content of the show hasn’t really changed, you still have the singing, the dancing, and the sketches. It’s a lot more contemporary now, but for me there’s nothing like a group of volunteers coming together and putting on a show. It’s not all about what you put in, it’s also about what you get back, and I’ve made some fantastic friends over the last forty years.”

We’re asking original members of the 1980 cast to get in touch by emailing 1980cast@castlecapersgs.co.uk

Permanent link to this article: https://newcastledistrictscouts.org.uk/2020/03/curtain-call-for-the-capers-cast-of-1980/