Centurion Explorers meet each Wednesday at 7:30pm for two hours, however on Wednesday 1st August the young people did not go home at 9:30pm like normal, they remained in the community centre to begin what would be camping adventure like no other they had been on. On the 2nd August 2018, Centurion Explorers from Newcastle-under-Lyme began an expedition to Vancouver, Canada. After over 18 months of planning, fundraising and hard work the unit including 20 young people and 6 leaders set off at 03:45 to fly from Gatwick Airport. After an early start, a 10-hour flight and an 8-hour time difference … the adventure of a lifetime began. 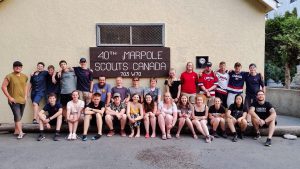 The first venture took us, 552ft high to see panoramic 360° views of Vancouver. Here, the young people began to see the size of Vancouver and pointed out locations such as Gas Town and the Whitecaps Stadium that they wanted to explore in that afternoon. With only a short time initially in Vancouver City Centre, we head to the Capilano Suspension Bridges, for spectacular views over 230ft above the Capilano River through open space and woodland. We were even lucky enough to spend an afternoon and evening at English Bay, to watch a firework display by South Korea in the final of The Festival of Light. Our first weekend went fast, and it was then time to get on a ferry and move camp, heading to Camp Byng, Roberts Creek.

Following the first trip, a highlight was the views and tranquillity at Camp Byng, heading out there for a second time, we were not disappointed. Camp Byng is a Scout Campsite, situated within a forest, next to a private beach, whilst the young people we took are used to seeing the goat that lives at Kibblestone Scout Campsite, nothing could prepare them for seeing the family of black bears that live at Camp Byng. Whilst in an area, where the was no Wi-Fi connection, the young people really began to gel as a unit, friendships formed and went from strength to strength. Activities here included a day spend at Pedals and Paddles, an opportunity for the young people to go sea kayaking and SUPing in the Sechelt Inlet, seeing rare starfish, seals and houses worth millions of dollars.

Following a peaceful week at Camp Byng, we headed back to Vancouver city centre where our non-stop adventure continued. Our adventures took us to Grouse Mountain, a 1,200m mountain where at the top we went on the Mountain Zip lines, with lines up to 200ft high reaching speeds of up to 80km/hr. Grouse Mountain also is the home to two rescued Grizzly bears, Grinder and Coola, who stood less than 10m away from the young people.

Our final big trip took us down the Strait of Georgia, Whale Watching, our really early start was worth it when we were lucky enough to see a family of 6 orcas swimming in the wild. Following this our guide told us we were leaving because close by 2 large humpback whales had been seen. It is very rare to see both whale breeds on one trip, but we were lucky enough to see the orcas and then the humpbacks put on a show and wave to us using their fins which were estimated to be over 10ft each. 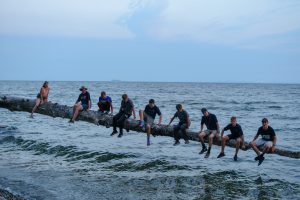 As the trip of a lifetime came to an end we brought our final souvenirs for our families and packed to come home. The fundraising and planning had paid off, our adventure was over, we had laughed and smiled every day; it was time to head home and catch up on hours of sleep. Scouting is always looking for more adults to volunteer their time, it’s only an hour a week, or a continuous 400 hours for the leaders that went on this trip, but, I’m sure each one of them would not change a thing.

Some comments by parents;
Thanks to all the leaders for giving up seventeen days of your valuable time to give our children such an amazing experience. It really has done him the world of good and seeing the enthusiasm on his face whilst telling his stories is heart-warming. You really are a fabulous bunch of memory makes.
Thank you to everyone involved in the organising of such a massive trip. He is truly privileged to have had the chance to go to Canada. We appreciate everyone’s hard work and his memories will last a lifetime.
A massive thank you to everyone involved with the Canada trip, from the organising of fundraising events to planning the itinerary and giving our kids the adventure of a lifetime and memories that will stay with them forever, I’m so proud that he is a member of the amazing Centurion Explorers, I cannot put into words the gratitude I have for you all, thank you doesn’t seem enough.

Permanent link to this article: https://newcastledistrictscouts.org.uk/2018/08/centurion-explorers-trip-to-canada/