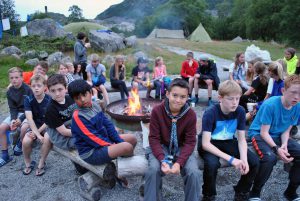 Over the past 14 years Mitchell Troop Scouts have established and upheld a close relationship with a Scout group based in Strand Jorpeland, Norway. We first met this group at the International Friendship Camp at Kibblestone in 2004. We hosted them again at the IFC 2008 and 2012. In 2016, we held a Potteries themed camp for our Norwegian friends at Kibblestone, making more friendships and memories. In between all of this we have spent three very enjoyable weeks (in 2005, 2010 and 2014) with our international friends in Strand Jorpeland, Norway.

During our 2016 UK camp, Mitchell Troop was invited back to Strand Jorpeland. Planning commenced in September 2017 to take 16 Scouts, 5 Explorers and 7 Leaders across to Norway for the week long camp. Flights were booked, team building camps were held, and kit talks happened and finally, after 11 long months of planning, we were ready to depart on our adventure on the 28th July 2018.

Things got off to a rocky start upon arrival at the airport. 28 excited Scouts, complete with rucksacks and hand luggage, arrived to the devastating news that our flights had been cancelled and there was no other option but to turn around and go home. One by one, parents were called back to the airport and we sent some very tired and upset children away, with no idea of whether our trip would be going ahead.

Fortunately for us, Scouting in Newcastle really is made up of a fantastic team of volunteers. Within 8 hours of being turned away from the airport a team of 4 Leaders had sat around a kitchen table and rearranged coach transport and flights out of Aberdeen and Newcastle upon Tyne airports for the following afternoon. There are no words to express the thanks we have as Leaders, and from the Scouts and their families, to tell the District how grateful we were for their personal and financial support during these stressful few hours.

At 3:30am on Sunday 29th July, 24 members of the group boarded a coach to take them to Aberdeen airport. All in high spirits, they set off on their 9 hour journey. Meanwhile, the other 4 members of the group travelled to Newcastle upon Tyne airport to catch their flight.
By 8pm all 28 Scouts had passed through security, boarded their planes, touched down in Norway, caught a ferry, and were finally dropped off in camp, 28 hours later than expected.

But we had made it.

Upon arrival at Camp 773 we were greeted by 32 excited Norwegian Scouts, Rovers, and Leaders. This meant that we had a total of 60 Scouts between our two countries, camping together for the week.
On our first day we sailed ships to an island for a pirate themed wild camp. Some of the scallywags amongst us were forced to walk the plank which naturally ended up with most of the Scouts in the sea! We camped out under tarps and in hammocks, tried new foods, and rebuilt friendships. The following day we sailed back to Strand Jorpeland where we were treated to lunch at the Norwegian Scout Hut on the harbour. The Scouts played ultimate Frisbee and then took part in sailing themed activities before heading back to site for a wash in the fjord. 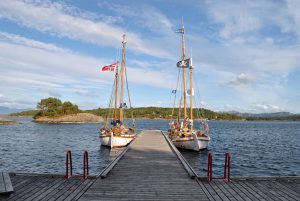 On Wednesday we travelled to Pulpit Rock where we planned to sleep under the stars. Whilst the sun set the Scouts set up their base for the night on top of the mountain. After sunset we walked to the edge of the cliff and, alongside 2,000 other people, watched the premier of Mission Impossible 6 in the open air. This was part of a big event in Norway that was reported by all major news networks as part of the movie was filmed on Pulpit Rock.

Having only had 45 minutes sleep, we hiked to the plateau of Pulpit Rock where we hoped we would catch the sunrise. Unfortunately we were met with pink cloudy skies and light rainfall, however the Scouts were still positive enough to pose for a group photograph with some of them daring to lie right on the edge and look down! Something which made our trip leaders stomach turn!
The Scouts then headed back to Camp 773 for some well-deserved sleep before more swimming in the fjords and then hosting an ‘English’ themed evening of food and activities. The Norwegians had invited family, friends, and old Scouters to join us for a Full English Breakfast and traditional English Scout games, rounded off with a classic campfire. 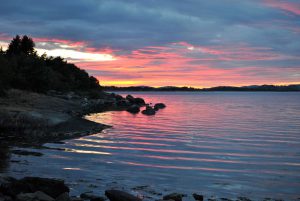 On our last full day with our Norwegian friends, we continued with our water themed camp and canoed 3 kilometres along the fjord to Grimsli  whilst stopping off at different shores to collect bingo cards. When we arrived at the beach we were treated to cheesy hot dogs in the rain before drawing the bingo and watching Leaders and Explorers take part in a very competitive ‘no rules’ canoe race. Needless to say everybody ended up in the water with our UK leaders winning the race (but not without cheating). The Scouts clambered back into their boats to complete the 3km return journey in tough conditions of headwind and rain. Upon arrival back at camp the Scouts chose to capsize their boats and were taught how to safely rescue each other before heading for some more fjord showers. In the evening we started to pack our bags and had our last supper together before heading outside for a group campfire. During the campfire we sang songs and were treated to a guitar solo, before exchanging gifts and hugs and toasting marshmallows.

On Saturday 4th August we said our teary goodbyes and boarded a coach for Sola Airport and the journey home began. After some minor hiccups the return journey ran considerably smoother than the outbound journey and we touched down on UK soil at 5pm where we were greeted by many happy parents.

Since arriving back in the UK we have received many positive comments from the Scouts and their families about what amazing memories they have made with their new friends. We have extended the invitation to the Norwegians to host them again in the UK in 2020 and we look forward to starting the planning process all over again!

Once again our thanks go out to Newcastle Scout District, families, friends, and fellow Scouters for all of their support in the planning and undertaking of this event.

More photos are in the gallery.

Permanent link to this article: https://newcastledistrictscouts.org.uk/2018/08/79th-clayton-scouts-trip-to-norway/