Yesterday saw Scouts from across the District parade in Newcastle Town centre to commemorate the patron saint of Scouting, St. George.
Over 300 Scouts and their volunteer Leaders, gathered at The Queens Gardens Newcastle before parading at 2.45pm along The Ironmarket, via High Street to St Giles Church for a service.
Newcastle’s Town Cryer, Mr Gordon Brayford, helped enhance the sense of occasion and Porthill Scout Group’s Drum Corps lead the parade, followed by Scouts from the District and invited representatives from the Girl Guides. 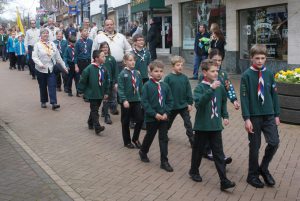 As 2018 is the 100th anniversary of the end of World War 1, part of the service commemorated Scouts who gave their lives during this conflict. As this is a specific commemoration, representatives of the Royal British Legion also  joined the parade and service.
As the parade passed by the Cenotaph in High Street, the Deputy Lord Lieutenant of Staffordshire, Wing Commander Elliott Sharrard Williams together with the Mayor of Newcastle, Cllr Simon White took the salute. The parade then processed in to church for a celebratory service, renewing Promise and a celebration of Scouting and local Scouting activities.
Members of the Castle Capers cast sang twice while in Church and various awards were also presented.

More photographs can be seen here.

As well as the parade in the Town, Groups also renewed their Promise while on camp at Kibblestone and members of the District who had received  the Queen’s Scout Award and Leader Awards were at the St. George’s Day Parade in Windsor in the presence of Princess Beatrice and the Chief Scout, Bear Grylls.

Permanent link to this article: https://newcastledistrictscouts.org.uk/2018/04/2018-st-georges-day-parade/