Support Newcastle District with the Co-Op

The District had been asked if they’d like to go to the last ever visit to the Mayors Parlour. It had been scheduled for a Thursday evening and the only Scout Group who meet on Thursday nights was 87th Holy Trinity.

They arrived at the Civic Offices at 19.00 and where met by one of the Mayors Mace bearers Peter. He welcomed them and showed them up into the Mayoral chambers, which is set for demolition later this year.

They waited for a few minutes outside the Mayors Parlour until they were shown in and entered the Parlour. Each of the scouts walked up and shook the Mayors and Mayoress’s hands and introduced themselves. They were then shown the Civic Mace and Mayors Wand, with these being explained to the Troop what the history was.

They also had a short history of the Borough’s Mayoral past. All in all a very informative evening and they learnt a lot about the Borough’s past and its history. The Scouts were even lucky enough to see the visitors book of any royalty that had visited the Borough. An excellent evening was topped off by the Scouts signing the last ever visitors book that will be placed up in the Borough’s museum and this made them excited. 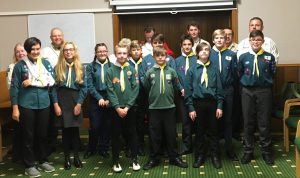 They even had a question and answer session inside the Council chamber with the Mayor and the Scouts loved this as they thought that the microphones were great as they had to depress the button and speak to the Mayor!

After this they went back into the Mayors Parlour and the buffet was opened with the Scouts having sandwiches and cake with the Mayor and Mayoress.

87th Holy Trinity would like to thank all who made the evening happen and also thank the Mayor, Councillor Simon White and Mayoress Councillor, Shirley Boyle, as well as Mr Peter Whalan the Mayors Mace Bearer.

More photos are in the Gallery.

Permanent link to this article: https://newcastledistrictscouts.org.uk/2017/09/87th-holy-trinity-are-the-last-visitors-to-the-mayors-parlour/