The weekend of the 7th– 9th July finally saw the arrival of the Newcastle District Camp at Kibblestone. It was over ten years since the last event of this nature and some 550 Beavers, Cubs, Scouts, Explorers, Leaders and members of the Adult Support Unit attended the Circus themed camp over the course of the weekend.

While tents had been pitched earlier in the week everyone started to arrive from 6.00 pm on the Friday evening to Circus music blaring out over the CMA Meadow. Fireworks announced the official opening of the camp at 8.00 pm and circus themed sectional wide games then followed all over both sides of the campsite.

The catering team produced breakfast for over 500 on the Saturday morning and the rest of the day saw activities for everyone. 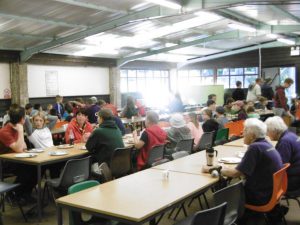 Professional circus instructors had been brought in to run bases such as juggling, diablo’s, plate spinning, tightrope walking and stilt walking just to name a few. These were supplemented with other activities including face painting, bouncy castles, axe throwing, crate stacking, assault courses and leaps of faith. 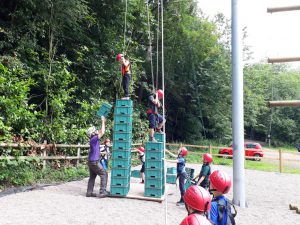 After tea a grand parade was formed led by Porthill Drum Corp and the whole camp ‘marched’ over to the campfire outside the Training Centre. This was truly a District Camp fire with every Group present doing ‘a turn’ – great to see their material both old and new. 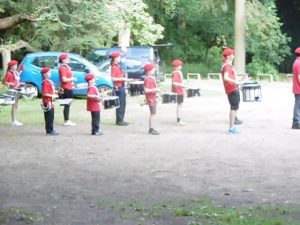 A firework display took place after the campfire and then the Beavers were off for a session of Magic, Punch and Judy and Balloon Modelling. At the same time a live band (Stepping Lane) brought the day’s events to an end by performing two ‘sets’ for everyone else over in the ‘Big Top.’ 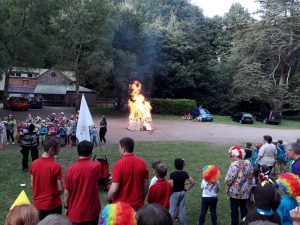 Sunday morning saw a short ‘Camp’s Own’ followed by a challenge to see how small an area we could get everyone on camp into and it appears you can get in excess of 500 people into a 5 x 10 metre ‘box’!

The sun had shone brightly throughout the weekend but all too soon it was time for the camp to come to an end and after some presentations and thanks at 12.30 p.m. everyone was off site by 2.30. It was strange to look down the meadow and see it  empty, it was as if we had never been there, well at least until the next time!

Our thanks to everyone involved in make the event the undoubted success it was.

More photos can be seen here, here and here.

Permanent link to this article: https://newcastledistrictscouts.org.uk/2017/08/2862/