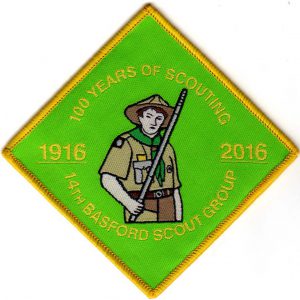 Today we are celebrating the centenary of 14th Basford Scout Group.

Exactly 100 years ago today, on 9th December 1916, the boys that would form Basford Scout Troop held their first meeting. This meeting was held while the country was in the middle of the Great War and was just one week before the official start of the (Wolf) Cub Scouts! 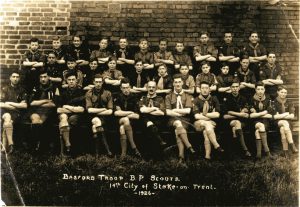 Basford is unique in Newcastle District and Staffordshire as one of its Scouts, William Redfern, was awarded the Cornwell Scout Badge in 1943. The Cornwell Badge is awarded in respect of pre-eminently high character and devotion to duty, together with great courage and endurance. Billy Redfern was presented his badge in November 1943. He had been ill for around 5 years with a diseased spine and had spent time in an iron lung.  Newcastle’s District Commissioner at the time wrote “I have never known him other than bright, smiling and corageous no matter how weak and painful his treatment at the time. In the best sense of the term he is a Good Scout”. Sadly he passed away in December 1943.

Billy is remembered by the Group by a stained glass window in St. Marks Church which also commemorates the four ex Scouts killed in the Second World War.

Billy is the Scout in the Group’s Centenary badge! 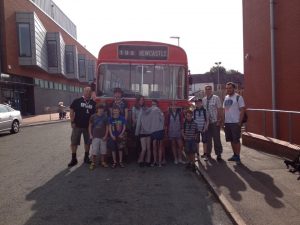 Members of the Troop off on a day trip to a camp site with 15th St. Giles

The Group has undertaken a number of international expeditions, including the Jamboree in Holland 1937, a visit from a Paris Group in 1947, a trip to Finland in 1949, a visit to Holland in 1977, a visit to Norway in 1979, the World Jamborees in England and Sweden in 2007 and 2011 and this year the District Cub trip to Paris!

As part of their birthday celebrations, Basford hosted this year’s Beaver and Cub Carol service where they told the District of their birthday. This event was supported through the Staffordshire County Council Local Community Fund. Newcastle District Scout Council thanks Councillor’s Sandra Hambleton and Stephen Sweeney for their support.

Today this successful Group has Beavers, Cubs and Scouts and feeds into Centurion Explorers in Wolstanton.

Happy birthday Basford and here’s to the next 100 years!

Permanent link to this article: https://newcastledistrictscouts.org.uk/2016/12/happy-100th-birthday-14th-basford-scout-group/