Last night, 87th Holy Trinity celebrated 100 years of Cubs as well as celebrating 64 years of unbroken service by one of their Leaders, Angela Stott.
Angela was presented with a Commissioners Commendation and received a message from the Queen and a special Papal Blessing along with a lot of lovely presents from Family, Friends and fellow Scouters. 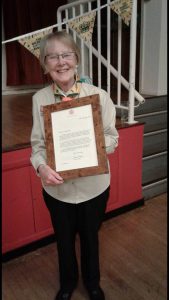 Here are a few facts about Angela’s Scouting journey.

It began in Liverpool when at the age of 16 Angela joined as a Ranger Scout and became a young leader.
She went on to meet and marry a Rover Scout and embarked on a career of military service along with her husband.
During this time as she travelled the world, she joined Cub Packs or started them up in areas that didn’t already have them; until her return to England where she settled firstly in Shropshire with a pack in Church Aston and later when they retired from the forces she moved to Newcastle-under-Lyme to open a guest house.
She soon became part of Newcastle District Scouts as a Cub Leader at 87th Holy Trinity where she has remained until this day.
Angela has held many positions during her 64 years in scouting, she has been part of the training team as an adviser, a member of the appointments committee and also the SASU, but her service with the Cubs has never been broken.
I think this is an amazing achievement and one to be recognised, she takes part in everything we do; she climbs, abseils, canoes and is a great ambassador for the movement.
Not bad for a lady entering her 80th year.

We had a wonderful evening last night along with current group members, past members, our friends from packs in the district and lots of people who have helped us over the years. It was a very memorable occasion.

More photos of the evening’s celebrations can be seen in the Gallery.

Many congratulations to Angela from all of Newcastle District.

Permanent link to this article: https://newcastledistrictscouts.org.uk/2016/10/87th-holy-tirintys-special-birthday-evening/