On Saturday, the District took part in Newcastle Town Centre’s 1st Food Festival. Taking over the area by the Market Cross and Guild Hall, we had raffles, tombola, tea and cakes for sale, cooking pancakes on tin cans, pizza ovens made of cardboard boxes and heated by tealights and a climbing wall. We also had a celebrity guest! 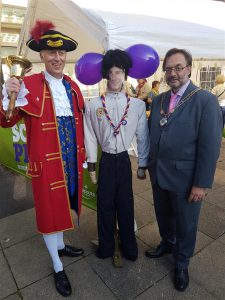 All the activity was to raise awareness of Scouting in Newcastle and to raise money for North Staffs Young Mind, a charity chosen by the Youth Executive, and the District itself.

The day was started by a parade from Queen’s Gardens led by 1st Porthill’s Drum Corps along with the Town Crier and the Borough’s Mayor, Councillor Ian Wilkes. The Mayor then opened the day’s proceedings.

In the morning a presentation was made to the District of a cheque for £1000. The presentation was made by Vic Richardson, one of the Trustees of the Orme Trust which is being wound up. The money is going to be used on outdoor activities and we would like to thank Vic and his fellow Trustees for their kind donation. 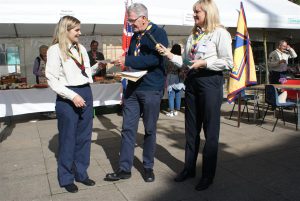 In the afternoon, Porthill’s Drums played down by Hassell Street and the High Street. 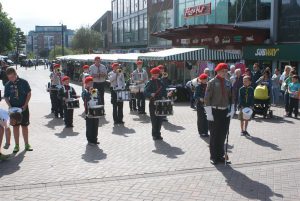 This was followed by the cast of Castle Caper 2016 giving a performance by the Market Cross. 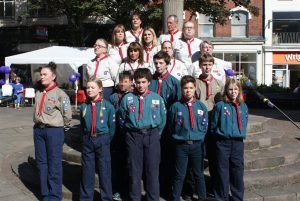 The day came to an end with another parade from Queen’s Gardens, led by the Drums, but this time with all our Group’s flags and by trolleys of food which was to be donated to the local food banks. Everyone came together again by the Market Cross and District Commissioner Vera presented a number of awards.

As the day came to a close, we counted up the money raised and found we had collected £1006. This will be split between the District and North Staffs Young Mind.

A huge thank you to all came along, helped, baked and donated!

Photos of the day can be seen here

The Castle Capers performance can be seen here

A video of the day’s events can be seen here

Permanent link to this article: https://newcastledistrictscouts.org.uk/2016/09/iscout-at-newcastles-food-festival/