Unveiling of the Scout Memorial at the National Arboretum

On Sunday, a number of Scouts and Leaders from Newcastle District were lucky in getting tickets for the unveiling of the Scout Memorial at the National Arboretum, along with over 2000 other Scouts & Scouters from around the country.

We all felt so privileged to have been given the opportunity to attend the unveiling of the Scout National Memorial at Alrewas. It was amazing to think that the vision was first thought up by a group of Explorer Scouts doing their Chief Scout’s Diamond Award. They did volunteer work at the National Memorial Arboretum and were left by their Leaders and told to meet with them an hour and a half later. After 3 hours went by, no Explorers had returned, so their Leader thought that they must of been lost and went off to find them. He came across the 5 of them who had walked around, reading the different Memorials and they had found that Scouting hadn’t got any memorial. The Explorers went through various people in their District and came up with the idea of fund raising to make one for Scouting. 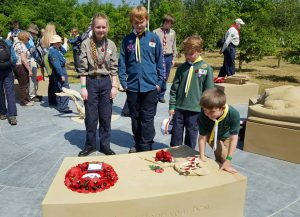 Sunday bore the fruits of their efforts and what an excellent Memorial it is. It is the trackers sign for gone home, it’s really breath taking to see as well as the stunning surroundings.

It’s well worth a visit to the National Memorial Arboretum with your Group it is such a lovely place to visit and take in all the Memorials.

We at the 87th Holy Trinity Scouts lost one of our great leaders in 2015, to a heart attack at the young age of 50. After the unveiling the Group laid a small wreath upon the memorial stones, the one with the necker on for the missing Scouter. RIP Mark Wainwright.

More photos can be seen in the Gallery.

Permanent link to this article: https://newcastledistrictscouts.org.uk/2016/06/unveiling-of-the-scout-memorial-at-the-national-arboretum/