On Sunday 24th April 2016 three amazing young people from our District, Nakita Emmens, Joshua Latham and Charlotte Tatton joined over 500 Scouts from across the UK to be honoured by His Royal Highness Prince Michael of Kent & Chief Scout Bear Grylls at Windsor Castle for gaining their Queen’s Scouts Award, the highest honour in Scouting and awarded for outstanding personal achievement.

This honour is achieved by completing a range of challenges including service to their community, completing an expedition in wild country, undertaking a five-day residential project in an unfamiliar environment and learning a new skill or developing an existing talent.

Our District Commissioner, Vera, said “Newcastle District Scouts are incredibly proud of their achievements and commitment, and wish that their success is recognised locally, as well as at Windsor. Their achievements are the culmination of a number of years work, during which they have undertaken challenges, physical activity, new skills and service to others. Thanks must go to all the Scout Leaders who have given their time to support and advise them to gain this award.”

Bear said “All these young people have lived the adventure of a lifetime to achieve their Queen’s Scout Awards, and I admire that spirit so much. They are huge inspirations to the other 550,000 Scouts in the UK and I am so pleased that both Scouting has honoured. They are amazing”.

As well as the Queen’s Scouts who travelled to Windsor, Leader Stephen Baddeley from 74th Silverdale Scout Group was also at the Windsor event as the recipient of the Silver Acorn Award. The Silver Acorn is awarded to Leaders after 20 years’ service, which should be especially distinguished. 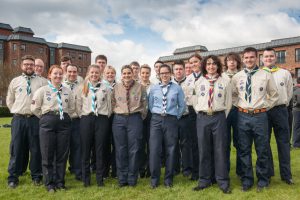 The 20 Queen’s Scouts from Staffordshire:

Permanent link to this article: https://newcastledistrictscouts.org.uk/2016/04/2016-windsor-parade/