Well over 500 Scouts, Guides and adult volunteers from Newcastle paraded through the town centre on yesterday to celebrate Scouting, Guiding and their patron saint, St. George.

Before the parade, and in between the rain showers, a new Cub Leader was invested in the Queen’s Gardens into 107th Westlands! 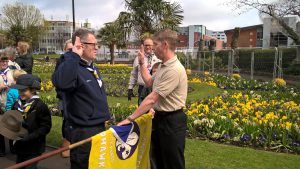 The parade was led by the Town Crier and 1st Porthill Scout Group’s Drum Corps. The parade passed Newcastle’s War Memorial, where the young people were watched by the Borough’s Mayor and Scout and Guide Commissioners, to St. Giles Church for a service of celebration. 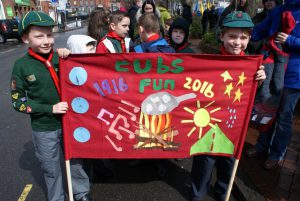 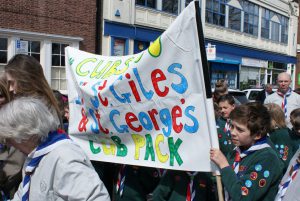 The Guides were also celebrating the 100th birthday of the Guides Senior Section.

The talented cast of Castle Capers 2016 sang two numbers while in Church. 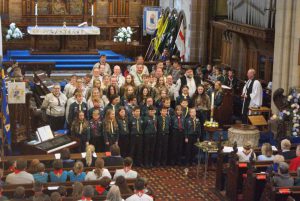 During the service, Scouts and Guides of all ages renewed their Promise and awards were presented by Mrs. Sandra Hambleton, the Borough’s Mayor, to adult Leaders and helpers.

We were very pleased to have been joined this year, by members of the local Royal British Legion who had come straight from commemorating ANZAC Day in Cannock. We hope they will be able to join us again next year. 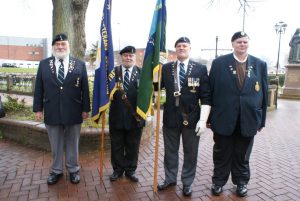 More photos are available in our gallery

Permanent link to this article: https://newcastledistrictscouts.org.uk/2016/04/2016-st-georges-day-parade/