This year’s AGM saw the introduction of the Young Executive Committee to the District, awards presented, new appointments announced, requests for new people to take on District roles and emphasising the need for better communication in the District. 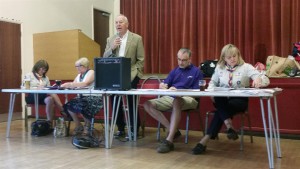 District Commissioner Vera gave her review of the past year, including the request for members of the District to communicate with each other more effectively, the many impressive activities put on across the District, including Castle Capers, iScout for Dougie Mac and three trips abroad. Vera announced that Karen and Viv had stepped down as ADC Beavers and DESC respectively and thanked them for all their hard work over the course of their appointments. She then announced the new appointments of Kirsty Viggars-McQueen as ADC Beavers, Paul Bailey as ADC Scouts and Chris Durham as Appointment Secretary in conjunction with Steve Broadhurst. Vera said the District is now looking for a District Explorer Scout Leader or a number of people to take on the role as ‘Team DESC’.

Our District Chairman John announced that Gretta Bloor has been appointed as one of the District’s  Honorary Vice Presidents in recognition for all she has done for the District.

Vera then presented bunches of flowers to Sharon Whittlestone and Linda Baddelely in recognition of their hard work dealing with various parts of the District’s administration. 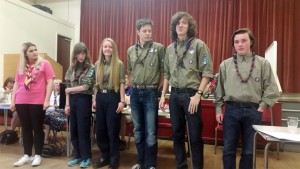 Before the end of the meeting, the new District Young Executive Committee was introduced the District. Made up of Explorer Scouts from across the District, they stated their aim was to promote Vision 2018 and make the District more youth led. They have plans to hold a District Explorer camp and to raise awareness of Scouting by fundraising for charity. Vera presented all the members with a District neckerchief.

The evening concluded with refreshments and view the displays put on by the various Groups from across the District.
Photos courtesy of N A Wood

More photos are in the Gallery

Permanent link to this article: https://newcastledistrictscouts.org.uk/2015/06/2015-annual-general-meeting/