Last Saturday (27th June), 1st Porthill’s Drum Corps were honoured to be invited to play at the National Memorial Arboretum at Alrewas near Lichfield for Armed Forces Day.

The band took their youngest members from the Cubs, along with Scouts, Explorers and Leaders. Members of the band’s families also came along for support.

They played firstly, by the Royal Navy’s Memorial. This was completely in the open and during their performance there were fly overs by helicopters from the Defence Helicopter Flying School (DHFS) at RAF Shawbury and Hurricane PZ865 (for those interested in such things!) from the Battle of Britain Memorial Flight. Despite these interruptions, the band played on without missing a beat!

Amongst the members of the public and members of the armed forces, both serving and retired, who watched this performance was Ian Dudson, the Lord-Lieutenant of Staffordshire.

After a break where everyone had a look around the Arboretum, the band then played to a larger audience in a marquee next to the visitors centre and entrance. This performance was again well received and many people came up to the band members afterwards to congratulate them.

Everyone had a great day and the band was proud to have been invited to play at such a prestigious event. 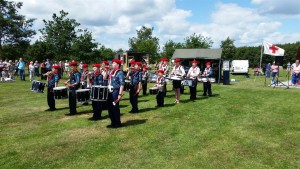 More photos are in Porthill’s Gallery.

A bonus video of the second performance taken by one of the Group’s Beavers!

Permanent link to this article: https://newcastledistrictscouts.org.uk/2015/06/1st-porthills-drums-play-for-armed-forces-day/