The Nepal Earthquake and Nepalese Scouts

Over 500 Scouts and Guides and adult volunteers from Newcastle paraded through the town yesterday (Sunday 26th April) to celebrate Scouting, Guiding and our patron saint, St. George. 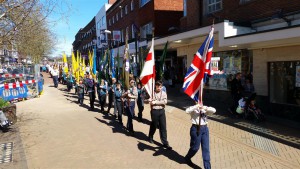 The parade, led by 1st Porthill Scout Group’s Drum Corps, went from the Queen’s Gardens, up the Ironmarket and past Newcastle’s War Memorial, where the young people were watched by the Mayor and Scout and Guide Commissioners, to St. Giles Church for a service of celebration. At the front of all the Scouts and Guides in church was Jack Stanyer carrying St. George’s Flag. Jack represented all the young people who gained top awards at the St. George’s Day Parade in Windsor last year after receiving his Queen’s Scout Award.

District Commissioner Vera, took the opportunity to get Newcastle’s Mayor, Councillor Mrs Linda Hailstones, to present awards and Wood Badges to a number of adult Leaders. 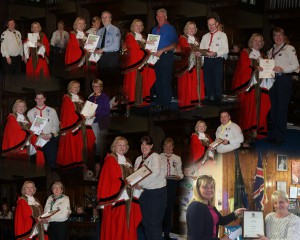 During the service, Scouts and Guides of all ages renewed their Promise and awards were presented to adult Leaders.

Following on from the iScout For Dougie Mac event held in the Town last September, a cheque for £2026 was presented to Jenny Peak from the Douglas Macmillan Hospice. 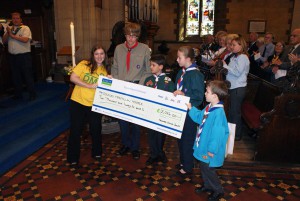 More photos can be seen in our Gallery and on the Sentinel’s Website.

Permanent link to this article: https://newcastledistrictscouts.org.uk/2015/04/2015-st-georges-day-parade/