This is not an unusual event in itself. However, as Simon was invested, the Troop’s flag was held by two Scouts who happened to be his daughters! 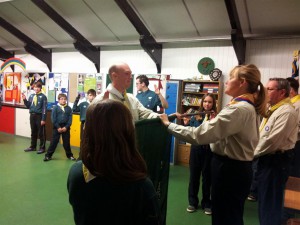 Simon was invested by District Commissioner Vera, who the previous week had invested Simon’s wife Esther as an Assistant Cub Leader, which is a great way of keeping Scouting in the family!

Congratulations to both Simon and Esther.

Permanent link to this article: https://newcastledistrictscouts.org.uk/2014/11/investing-dad/