Sad News from the Division

Members of 1st Porthill visited the National Arboretum at Alrewas, near Lichfield on Sunday

On a rather cold and misty morning, they were given a guided tour around some of the memorials, including the Armed Forces Memorial, The Memorial to William Coltman (a Staffordshire man who was the most decorated other ranks soldier of WW1), The Gallipoli Memorial and the Shot at Dawn Memorial amongst others. Some of the Group at the Armed Forces Memorial

While they were there, the RAF Association were there to pay their respects to their fallen comrades and the Association’s pipe band were playing.

After the tour, the Group’s Drum Corps were honoured to play for the visitors to the Arboretum, including the members of the RAF Association. 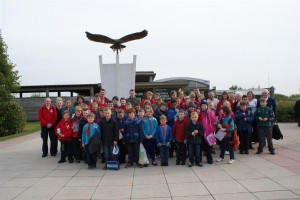 By the Berlin Airlift Memorial

More photos can be seen in Porthill’s Gallery.

Permanent link to this article: https://newcastledistrictscouts.org.uk/2014/10/1st-porthill-visit-the-national-arboretum/