Newcastle Leader Nominated for an Award! 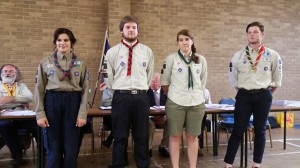 This year’s AGM saw a lot of comings, goings and awards!

This year we had a number of people stepping down from their current roles. Steve Broardhurst as DC, Gretta Bloor as Chairman, Mike Deakin as Appointment Secretary & Phil Roberson as Treasurer. We would like to thank them all for all their hard work over the years.

The vacant roles were then filled by the following people – Vera Bloor as DC, John Atkinson as Chairman and Steve Broardhurst as Appointments Secretary. We still have a vacancy for a District Treasurer, so if you or anyone you know would like to take on the role, please let us know!

Four of our recent Queen’s Scouts, Kaleisha, Daniel, Charlotte and Jack were then presented with the Queen’s Scout Award certificates by Bruce Field, the County Scout Network Commissioner. Bruce was very please at the amount of Queen’s Scouts coming from Newcastle this year praised all of them for their hard work ad dedication for getting the Award.

Steve Broardhurst, in his final act as District Commissioner(!), gave out a number or Woodbadges and Long Service Awards to adult volunteers.

Finally, Vera talked about her shoes! She said that with a lot of new people in the District, things were bound to change, but like having different types of shoes from the same manufacturer, some would be new, some the old comfortable shoes that had been worn for ages and some the daring experimental shoe! Vera also commented how the District is committed to being more youth led and announced the creation of a young people’s executive which will have representations on the main District Executive.

The evening concluded with refreshments and view the displays put on by the various Groups from across the District.

Permanent link to this article: https://newcastledistrictscouts.org.uk/2014/06/2014-annual-general-meeting/