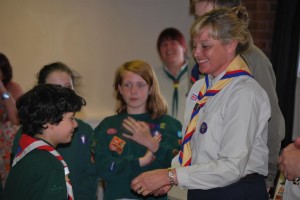 On Wednesday 21st May 2014 District Commissioner Designate, Vera Bloor, was invested into the Scouting family by the Leader who nominated her for the role.

Several months ago while the District was on the journey to find a new DC, a chance social event gave rise to a conversation about Scouting and the roles available. It was suggested that Vera might like to consider the role, and the nomination process was started.

When it came to investiture, Vera felt that the person who should complete the task, was the one who nominated her for the role, so Group Scout Leader, Ian Bradford, was asked to perform the ceremony.

At the Cub Pack meeting at 15th St Giles Scout Group, Ian invested Vera, alongside 2 new Cubs, and in front of their families and other Scouting friends who were at the Pack meeting

Ian Bradford was quoted as saying ” when I nominated Vera I had no way of knowing if she would take the role on, although I felt sure that she was more than a match for the level of commitment and activity that the role requires. It was an honour to then be asked to be the leader to perform the investiture. Everyone at the 15th wishes Vera well in her new role which formally starts in June”.

The whole District congratulates Vera on her investiture and we look forward to her taking on the District Commissioner’s role in June when Steve stands down.

Permanent link to this article: https://newcastledistrictscouts.org.uk/2014/05/new-district-commissioner-invested/