Crowds of people saw over 500 Scouts and Guides from Newcastle parade through the town on Sunday, as they celebrated England’s patron saint. 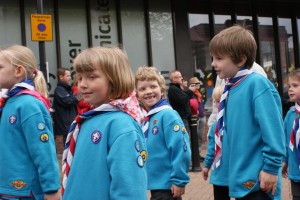 The Ironmarket was packed with members of the public who came to see off the St. George’s Day parade from Queen’s Gardens and was lead by 1st Porthill Scout Group’s Drum Corps. The parade passed Newcastle’s War Memorial where it was watched by the Mayor and Mayoress of Newcastle, Cllr. Eddie Boden and Mrs. Doris Boden. 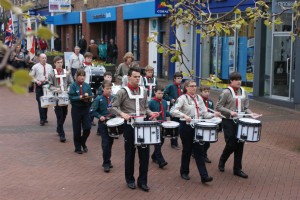 From there the parade went to St. Giles Church for a service celebrating the achievements of the Scouts and Guides and also to celebrate the 100th anniversary of the Brownies. 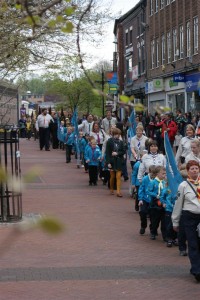 Cub Scout Zoe McDonagh, aged 9, from Wolstanton said “I really enjoy all I do with the Cubs. I’ve just been in the Castle Capers Gang show for the second time, I had a brilliant time and didn’t want the show to finish! I’m really proud to have carried my Pack’s flag in the parade today”. Her brother, Andrew, aged 6, who is a Beaver Scout, said “When I grow up, I want to be a Leader like my Dad!”

Beaver Scout Leader, Rachael Hickton, aged 23 from Porthill said “Every Friday, I look after a group of six to eight year olds and organise group activities such as climbing. Everything we do is to help build their confidence. At first the kids are really shy, but it’s nice when you see them develop and grow in confidence”.
At the Church Scouts and Guides renewed their promises and members of the Brownies did a presentation celebrating their Centenary with some of them wearing old style uniforms.

Permanent link to this article: https://newcastledistrictscouts.org.uk/2014/05/2014-st-georges-day-parade/