“Castle Capers twenty fourteen Gang” is a line from one of the songs from Ruby Anniversary Show of Castle Capers 2014, which was recently performed at the Mitchell Arts Centre in Hanley and WHAT A GANG WE HAD.
With over 120 cast members from every section within the Newcastle Scout District, supported by equally as many people behind the scenes, Production, Back Stage, Costume, Business Committee, Ticket Secretary, Refreshment Team, Raffle, Front of House Team, Photographers and many others who I am sure I have missed (but not intentionally) so if I have missed some one I apologise now.

Over the week the show was well presented by the cast and more that well received by all in the audiences. Every one in the Gang should be proud of there performance, there are no Stars in a Gang Show but I have to say that every member of the “Gang of 2014” did shine. And shine to such an extent that on the final performance on Saturday evening the whole of the audience gave them a standing ovation, which was well deserved. 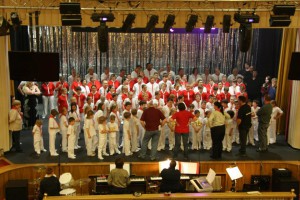 1974 to 2014 is a long time and over the last 40 years we have seen many changes in performance venues from College and School Halls to a Professional Theatre, as well as Producers and Support Teams who have put Castle Capers on a Firm Foundation. The next Castle Capers in 2016 may well see further changes but I am sure that the Cast and all concerned will take on the challenges and entertain the audiences in the future equally as much as they have in the past.

Permanent link to this article: https://newcastledistrictscouts.org.uk/2014/04/castle-capers-2014-the-40th-anniversary/