On Saturday, members of the Keele University Network and 1st Porthill’s Drum Corps took part in the Keele University student RAG (Raise and Give) parade. This is the first time the parade had taken place for many years. The parade started at the Peter Pan Nursery (for whom some of the money raised was going) and went on to Newcastle.

In Newcastle there were numerous musical acts playing in front of the Guild Hall all day. 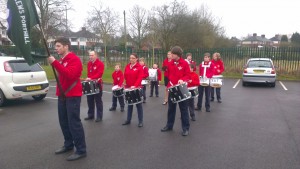 We hope Keele RAG were able to raise lots of money for their charities.

Permanent link to this article: https://newcastledistrictscouts.org.uk/2013/03/keele-rag-parade/