Newcastle District Scouts took part in the District 2012 Scout Camp at Kibblestone. 60 Scouts and leaders attended the camp and spent the weekend learning about and taking part in activities such as pioneering, axe and bow saw use, make and bake bread twists and preparing, cooking and eating fish. The Scouts also enjoyed a campfire, film night, non Olympic team games and wide games.

On the Saturday the Scouts also prepared and cooked their own chicken stew as part of the District cooking competition, which this year was won by the 15th Saint Giles & Saint Georges & Red Street Scouts combined team – well done!

Many thanks to our District Commissioner Steve Broadhurst for coming along and judging the competition! 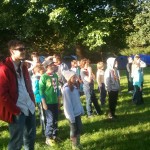 Permanent link to this article: https://newcastledistrictscouts.org.uk/2012/09/district-scout-camp/