Congratulations to all who took part in yesterday’s St George’s Day Parade.

Despite the threat of poor weather and a likely soaking, St. Giles’ church was filled to capacity with a mass of Scout uniforms after the St George’s Day Parade through Newcastle. A very quick reckoning, made as flags passed the saluting base, suggested that at least 12 of the 15 Scout Groups were “on parade” plus a good number of Explorer Scouts from around the District and, for the first time this year, both members of Keele Network and our own Newcastle Network (Narwhals) very proudly sporting their new name tapes.

The District should feel, and is, very proud of the Explorer Scouts who talked of their experience of representing us in Sweden last year at the World Jamboree; of the members of the cast of Castle Capers 2012 who sang a song from the recent show so professionally; of the Porthill Drum Corps who provided such lively support to the parade – it is hard to believe how young some of the members of the Drum Corps are and how recently formed the Corps is itself; of the sheer number of youngsters prepared to turn up on a wet Sunday. 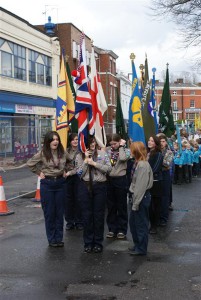 Permanent link to this article: https://newcastledistrictscouts.org.uk/2012/04/2012-st-georges-day-parade/