We are very please to announce that Gretta Bloor has been awarded the Chief Scout’s Commendation for Meritorious Conduct Medal. 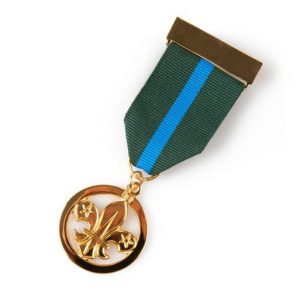 Gretta has been involved in Scouting for over 35 years, and her dedication and support to Newcastle District, and more broadly Staffordshire, has been recognised previously in the award of long service and the prestigious Silver Acorn award.
However this particular award, which has only been awarded in our District to one other person, Paul Bailey, and we are very pleased to be able to recognise the determination and willpower Gretta has shown many of both the adult and youth members of our District to overcome many difficulties.
Gretta’s journey over the years from an initial stoke in 2006, atrial fibrillation, a fall resulting in a fractured pelvis and arm, osteoporosis, a number of other debilitating conditions, to her latest retinal haemorrhage in 2020 has been long but she has always undertaken any treatment with bravery and fortitude.
Despite long periods in hospital and rehabilitation she has never lost her belief that she could improve. Learning to walk again and to live in a world that she could no longer see clearly. Learning to rely on other senses rather than her vision. Gretta gave a short presentations to the West Midlands Clinical Network Meeting in Birmingham on the impact of early supported discharge on recovery from her stroke.
Prior to the initial stroke Gretta had been the District Commissioner in our District having recently stepped down after 10 years of service. She had then taken up the role of District Chair to support the new District Commissioner a role which it was thought she would not be able to return to. This however was not the case and with support she was able to gradually return to these duties. Gradually increasing her input until she was fully undertaking the role again despite the further setbacks. At the same time she was also successfully chairing the executive Committee of Kibblestone International Scout Camp. In 2014 Gretta stepped down from the role of District chair when a new District commissioner was appointed. In 2010 Gretta also joined the District ASU becoming a very active member with the support of her husband attending sports days, swimming galas and District camps providing invaluable advice and support.
She has always shown determination and strength to regain as much independence as possible whatever has happened and following each setback. She has remained an active member of our scouting family within her abilities and has been an inspiration to many.
Following her second stroke and then her fall despite her further difficulties with the help of her husband, Roger, she still continued to attend many events, supporting her husband as Group scout leader at Ashley and was as active in the Active Support Unit, as she could be attending scouting and social functions.
She has remained a valued member of the ASU and we are hoping that despite the latest retinal haemorrhage in February this year once the lock-down through Covid 19 is over that she will be attending the ASU meetings once they can start again.
As well as her continued commitment to Scouting she also maintained her love and support for her local football team even following them to Wembley. Above all her love and care for her family never faltered.

Permanent link to this article: https://newcastledistrictscouts.org.uk/2021/04/gretta-bloor-chief-scouts-commendation-for-meritorious-conduct-medal/