Isobella Emmens, Kaleisha Emmens, Christopher Eyton-Jones, Sion Hughes, Charlotte Pritchard and Jack Stanyer, from Newcastle District Scouts, are joining over 500 Scouts from across the UK on Sunday 27 April 2014 to be honoured by international adventurer Chief Scout Bear Grylls at Windsor Castle for gaining their Queen’s Scouts Award, the highest honour in Scouting and awarded for outstanding personal achievement.
This honour is achieved by completing a range of challenges including service to their community, completing an expedition in wild country, undertaking a five-day residential project in an unfamiliar environment and learning a new skill or developing an existing talent.
Jack, aged 20, from Wolstanton said “Gaining my Queen’s Scout Award has been awesome. One of the best things I have ever done in Scouting was having a real adventure completing my expedition. I hiked over 50 miles across the Black Mountains and Brecon Beacons in Wales”. 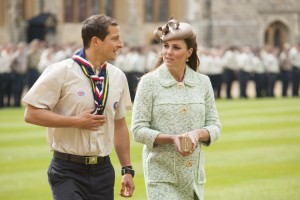 Chief Scout Bear Grylls said “All these young people have lived the adventure of a lifetime to achieve their Queen’s Scout Awards, and I admire that spirit so much. They are huge inspirations to the other 550,000 Scouts in the UK and I am so pleased that both Scouting has honoured them today. They are amazing”.
Achieving the Queen’s Scout Award
Explorer Scout and Scout Network members aged under 25 need to complete a series of requirements;

• Providing service to the community for 12 months. Briefing and training should be given in order to gain the necessary skills.
• Learning a new skill for 12 months, and show progress and lasting interest. The skill can be the development of an existing interest or something entirely new.
• Completing a four-day and three-night expedition in open or adventurous country by foot, cycle, horse, canoe, boat or dinghy. The expedition should involve careful preparation, training, responsibility and review demonstrating leadership and teamwork skills.
• Completing a five-day and four-night residential project in an unfamiliar environment with people who are not known. This project should be environmental work, activity based, service to others or personal training.
• Completing 18 nights away, of which 12 must be camping.
• Making a presentation, to a suitable audience, of your achievements so far in working towards the Queen’s Scout Award.

Further information
Further detail for how to undertake the award can be viewed online.

Permanent link to this article: https://newcastledistrictscouts.org.uk/2014/04/chief-scout-bear-grylls-to-recognise-scouts-top-achievers/